The arts project hEdges based in Hilperton and Paxcroft Mead has been up and running since September 2014. The initial concepts for this project were reflected in my guest blog at the start of the project. The idea of this project materialised and was inspired by the old names of the green fields that have now been built on. With many hedges no longer in existence, I wanted this art project to encourage people to think about how we can replace the ecologically important hedgerow habitat that is massively in decline as wire fences become the norm and think more sustainably about food supply for new housing.

Hedges themselves are aesthetic framings of pastures and livestock, crafted in regional styles and with a rich set of symbolic associations in folklore. The word hag, or witch, is said to derive from the belief that they could hedge-ride, crossing the borders between civilization and the wildwood (haga, gehaeg and hegge are Old English for hedge). Hedges are even political – from the 16th century onwards the prefix hedge referred to people of the lowest orders – hedge-doctors, hedge-lawyers and the hedge-schools of Ireland of the 18th century which kept alive Catholic teachings hidden from the Protestant ruling class. All this and more, by the way, is in Hugh Barker’s excellent book Hedge Britannia.

So I have been thinking about how to engage people with this commonplace but fascinating subject by using the interest we all have in food and some of the rich imagery of the suburban garden.  To find out what the local food and garden culture is I have been out and about talking to residents. I’ve also used our project website www.h-edges.org.uk and various local networks to encourage involvement at different levels (some people have the time to actually come to things, some want engagement quickly and virtually). If at all possible I wanted people living in this area to be co-authors of the project. Whatever you do engagement takes time to build and starts slowly, but it’s worth it as the objective is to leave both a legacy which is in people’s heads, as well as in place-markers on the ground like plants, signs and objects.

On the more formal side it’s been great to have worked with and been advised by various county council officers including technical, highways, environmental, as well as gaining support from community representatives including the parish council. Not least all this is needed in order to get the right permissions in place. Keeping people updated with all the plans as they evolve has been crucial. I have of course spent a lot of my time designing and planning the physical artworks including negotiating with artisan fabricators and gardeners, collaborating with landscape designers Ginkgo Projects.

So, the project is now well underway and has generated some interesting responses and insights into the food resources on people’s doorsteps. For example we’ve had autumn recipes from members of the Hilperton Women’s Institute (Melissa, Jean and Glayne) for Blackberry Ketchup, Blackberry Curacao and Slow Gin, undertaken a survey of autumn fruit across the new housing area, talked with local people about a community orchard and had some striking images sent in by 30 residents of what is growing in the old pastures of Hilperton.

We are building on this work with an event on the 23 May 2015, collaborating with a restaurant that specialises in working with foraged ingredients and Ginkgo Projects. Matthew and Jack from the Ethicurean restaurant will be showing local people how to make Hilperton Hedgerow cocktails using locally available herbs and plants, a new rite of spring perhaps. We may even create a unique Hilperton cottage industry. Come along by booking through the Food and Drink Event page on the hEdges project website. 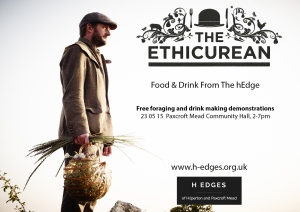 On the ground our New Model Farm has started to take shape with the help of local volunteers, new fruit trees have been planted by Paxcroft Brook as an elegy to a hedgerow which disappeared a few years ago and had been there for hundreds of years before on the border of The Mead and Painter’s Mead fields. A further planting of fruiting bushes in Ashton Lane will take place in October this year. This project is not an excuse for nostalgia though – these trees will bear fruit soon, free food for future generations in a time of choice between land for farming and land for housing. 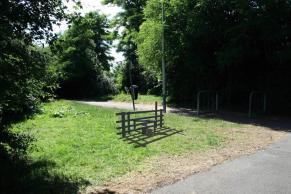 In June, the Painters Mead site will also have installed a new 1/3 scale bridle gate being made by the Somerset Forge, one of three works (bridle gate, stile and 7 bar gate) which also remember the thresholds and transitory points between ancient field enclosures – Help’s Well, Brown Tyning, Top Ground, Southfield and Wet Lands – now mown park, verges, roads and kerbs. 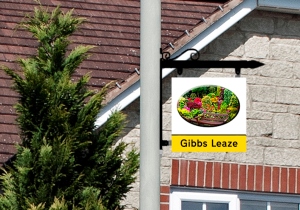 The project also reconnected to the old fields of Hilperton and Paxcroft Mead through a survey of what’s grown in Hilperton houses, gardens or allotments today. So we asked people to send us a photo of anything they liked growing in, on or around their homes – flower beds, favourite pot plants, vegetables in their allotment, what is growing naturally in the garden, or even the animals looked after – pets like cats, dogs or hamsters – anything that lives and grows alongside us. The residents’ photography competition saw over 70 entries and images sent in by residents, including the children of The Mead Community Primary school. These will appear across the whole area on the new field signs which will mark the old field names.

I believe that this arts project has been open to all on the ground and will hopefully allow at least some to see their public spaces in a different way, as places ordinary people can change positively and feel better spending time in and looking after. In this way it is also an attempt to make heritage and the idea of local distinctiveness a force for change. This is important as some people feel that environmental concerns like ecological habitat loss are too big for individuals to make a difference -in fact it is by small cumulative actions that big change usually happens.

Find out more about the whole project online.

Footnote: hEdges is a public art project for Hilperton and Paxcroft Mead which has been developed by Hilperton Parish Council, Paxcroft Mead Residents Association, Wiltshire Council, Curo Housing with the involvement of lots of other people and groups from the area. The project has been funded by local housing developers Abbey Homes and Taylor Wimpey.

One thought on “Guest blog: Artist Alex Murdin talks about progress on hEdges, a public art project for an expanding housing area around Hilperton and Paxcroft Mead”

This site uses Akismet to reduce spam. Learn how your comment data is processed.