2017 was a momentous year for artist Julie Weir, 46 and her writer husband, Mark 48. It was when they decided to stop life dragging them uncontrollably towards old age without ever pausing to enjoy the journey. Something drastic was needed!

So, they did what any normal couple would do; they sold their house in Hampshire and bought a canal boat to live on.

It satisfied a desire to take control, slow down, and escape a little, but not entirely.

As Julie explains; “It was an active choice to leap into the unknown, having given up careers, and a mortgage, and all the baggage that modernity brings, to live life in the slow lane (4 mph to be exact).” 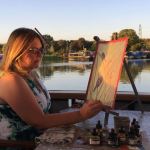 Julie Weir, painting on the boat

So why a canal boat?

Julie had been searching for an alternative lifestyle since they first met. She was a hippy at heart and had spent the past 20 or so years trying to persuade Mark that there was a better life out there other than the grind of eat, sleep, work, repeat. Julie said, ”We both wanted to pursue different careers. Mark always wanted to be a full-time writer, and I was working hard to get my art career off the ground, and making a dramatic move was the best way to do it.”

It was a TV programme that eventually sold the idea to Mark: My Floating Home broadcast an episode about a couple who moved onto a widebeam barge, and that gave them the answer they had been looking for.

Fast forward six months and the house was sold, and the boat purchased, and so began their move from a house to a boat, and life afloat.

Mark was looking to forge a career in freelancing while penning novels. His third book, a historical romance called “Annie of the Point” was released in August 2018, and a follow up is in the pipeline. He said, “I knew that I could work from anywhere. All I needed was a good internet connection and a laptop.”

Julie did her research and found that Wiltshire was a county with strong links to the arts, and support for artists. This was in stark contrast to living on the South coast, which brought few opportunities as art was never a priority for the cash-strapped councils.

And their decision to live in Wiltshire was correct. Since moving onto the boat, Julie is now running two successful workshops a month, one in Trowbridge, at The Court Street Gallery, and ironically, another in Chichester, on the South coast.

Julie teaches painting wildlife in Acrylic inks and the views from their canal boat have influenced her work. Julie said, “Being so close to nature has influenced the way I paint, and what I paint. My work features lots of British wildlife and birds that I see along the canal side.” Julie also attends country shows and fairs, selling original artwork, and taking commissions to paint family pets.

She has also joined the committee of the Lawrence Art Society in Devizes where she will be helping to organise the coming art trail and exhibition for the society.

So, has moving onto a canal boat been a success?

“In so many ways, yes, it’s been an enormous success for the both of us,” explained Julie. “My artwork has taken off in directions I could only have dreamed about when I lived in the house. I have so many opportunities here, in Wiltshire,” she said, “and it’s all down to taking that leap of faith and moving onto the boat.”

Mark has also fulfilled his dream of becoming a full-time writer, and now works as a freelancer from the boat during the day, while his follow up novel to “Annie of the Point” is due out next year.

One thought on “Guest blog: Artist and Writer, Julie and Mark Weir discuss how they swapped bricks and mortar for a life on the water”

This site uses Akismet to reduce spam. Learn how your comment data is processed.